It's funny, and not the least bit ironic — as I've been traveling on this new journey toward a healthier diet, that food has occupied a lot more of my time and attention than it did when I was just eating for pure enjoyment, without regard for the consequences. 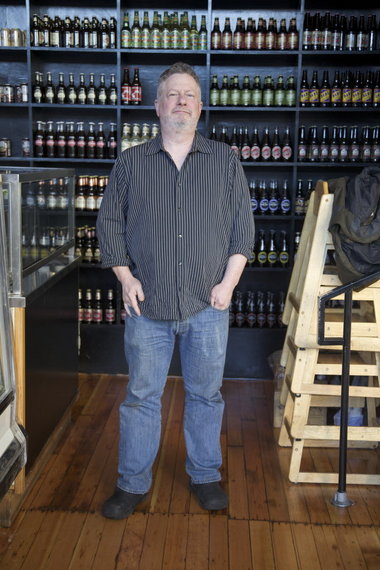 View full sizeMichael Lloyd/The Oregonian.Ken Gordon, owner of Kenny and Zuke’s Deli, was diagnosed with diabetes early this year. He will keep a diary of his efforts to help treat his condition with diet and exercise. In the first two weeks, he lost seven pounds.

It’s funny, and not the least bit ironic — as I’ve been traveling on this new journey toward a healthier diet, that food has occupied a lot more of my time and attention than it did when I was just eating for pure enjoyment, without regard for the consequences.

Shopping takes longer because I read everything — every package and jar and box — for nutritional information that I couldn’t have cared less about before my diagnosis. A carbohydrate? What’s that taste like?

And I cook a lot more. I still love eating out and taking out, but they’re a bit more challenging now. When I cook, I know what I’m cooking with, and it’s easy to quantify for the calorie and carb budgeting that I must now do.

For most people, cooking can be a chore. And who has the time these days? The answer is … most of us! Well, not if you’re going to catch the latest episode of “Oops, I Just Killed My Husband,” or whatever the hottest reality show is these days.

You have your own reality show to worry about, and it concerns your health and how you’re going to spend the rest of your life. Or whether there’s going to be a rest of your life. You can microzap a processed, refined-carb laden meal-sicle and watch “This Week With a Grotesque Person,” and count the days until a scary diagnosis, or you can get off the couch and cook something wholesome and put off what was — until now — inevitable.

When I started doing that, a funny thing happened: I quickly discovered I had a lot more energy. Perhaps my body was no longer spending so much of it digesting all those bad carbs and saturated fats. Or perhaps it was all in my head, and I was newly invigorated by my quest to get healthy. I don’t care, because something started working.

After the startling results of my recent blood test, the easy thing to do would have been to relax and revert somewhat to my old ways. And I have to admit that I did … a little. After all, a couple of chicken wings or some Cheetos (why did I put something that color in my mouth?) here or there won’t make my blood numbers soar again. Which is true. But I’m also cognizant of the slippery slope before me, and good sense dictates caution in the first steps after the progress I’ve made.

So what am I eating now, and how different is it from before? The answer is a lot of good stuff, and it couldn’t be more different from what I formerly ate. Here is a typical day’s menu, before and after diagnosis (note: nutritional contents are approximate):

As you can see, the differences are pretty dramatic. I didn’t used to eat that way every day, but there were a lot of days I did. And that doesn’t even count all the little bites and tidbits that all chefs indulge in all day long at their jobs.

And a lot of people eat this way pretty often. Now, I’m still eating well, and enjoying food. I haven’t gone vegan or vegetarian, but I’m eating smaller portions of animal protein and making sure what I am eating is of a higher quality. And veggies and salads are a much greater part of my daily intake.

Combined with a brisk three-mile walk, the results in weight loss and general health have been dramatic. Small wonder I’m feeling more energetic and clearheaded: I had nowhere to go but up. Actually, I feel pretty lucky to be alive!

Next: An ode to walking