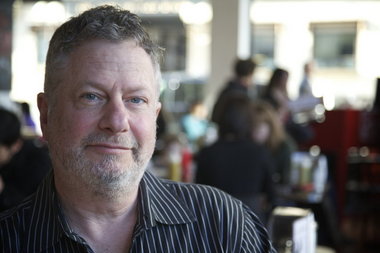 I’m going to digress a bit from my planned and promised column to talk recipes. One in particular. Many readers have written expressing their support, as well as sharing their stories, tips and recommendations. Many of the stories are inspiring. Some heart-rending. One thing most readers share is a love of good food and an unwillingness to completely do without it. And an insatiable need for recipes.

As an old-school kind of chef (and being just downright stubborn) I tend to eschew recipes and favor a more cook-by-the-seat-of-my-pants methodology. One thing I teach in the occasional class is that the more one cooks by recipes the more a reliance on them is established. Conversely, the more one can break away from them, the closer one becomes to being a real cook. I still believe that. But I also recognize that that’s easy to say if you’ve had 35 years’ cooking experience. Most people respond to such a philosophy by making a reservation at their favorite bistro.

So here’s a recipe. And it’s a favorite. It also happens to be the first meal I cooked after receiving my diabetes diagnosis. About 3 1/2 hours after, to be accurate. It’s delicious, if I do say so myself. And really healthy, unless you’re vegan. (Sorry, I’ll catch you in another column.)

The dish is a perfect transition from the way I ate before the diagnosis and after. For years I’ve gone out for pho perhaps two or three times a month at one of the many good places that specialize in it on 82nd Avenue or thereabouts. It’s always delicious, filling, nutritious and cheap. And it was the perfect dish for me to fiddle with and make healthier. A little leaner on the beef, substitute buckwheat soba noodles for the highly refined white rice noodles, add a lot more veggies and voilà: healthy pho.

And it’s the perfect meal to stretch. By stretching, I mean getting several meals out of one cooking session. Really, who has the time these days?

So let me introduce to you Ken’s Pho. Er, Fuh.

Make the stock: In a large soup pot, place the oxtails, short ribs, tendon, water, cloves, anise, peppercorns and cinnamon. Char the onions and ginger over an open flame with tongs, or in a heavy pan if you don’t have gas (or you’re scared). Add to pot and bring to a boil and reduce heat so it simmers. Every once in a while, when you think of it, skim any scum or other stuff off the top. Simmer about 2 hours, then add the fish sauce. Continue simmering until meats are very tender, maybe an hour and a half more. Remove from heat and strain into another pot, reserving meats. When meat is cool enough to handle, remove oxtail and short rib meat from bones. Slice short rib meat and tendon thinly. Skim any fat off the broth.

While meats are cooking, add soba noodles to pot of boiling water. Bring back to boil and cook noodles, stirring occasionally, for 5 minutes. Drain and rinse with cold water to cool.

When ready to serve, bring broth to simmer and add broccoli. Simmer for 3 minutes and turn off heat. Divide noodles among 6-8 large soup bowls. Divide oxtail, tendon and short rib meat among the bowls, scattering around the noodles. Divide the raw eye of round among the bowls, laying beef overlapping on top of noodles. Ladle hot broth and broccoli over raw beef, filling bowls (this will cook the raw beef). Serve with garnishes and sauces for dipping.

Notes: Thai fish sauce is loaded with salt. Use less if on a salt-sensitive diet. … You can purchase thinly sliced eye of round and tendon at Uwajimaya or Fubonn Markets, or from most Asian markets. If you don’t have access to one of these, buy a tender cut of beef and slice as thin as you can. … Beef tendon, though it seems fatty, is almost pure protein, and my wife, Leslee, loves it!

Next: Eating out and good health: a partnership